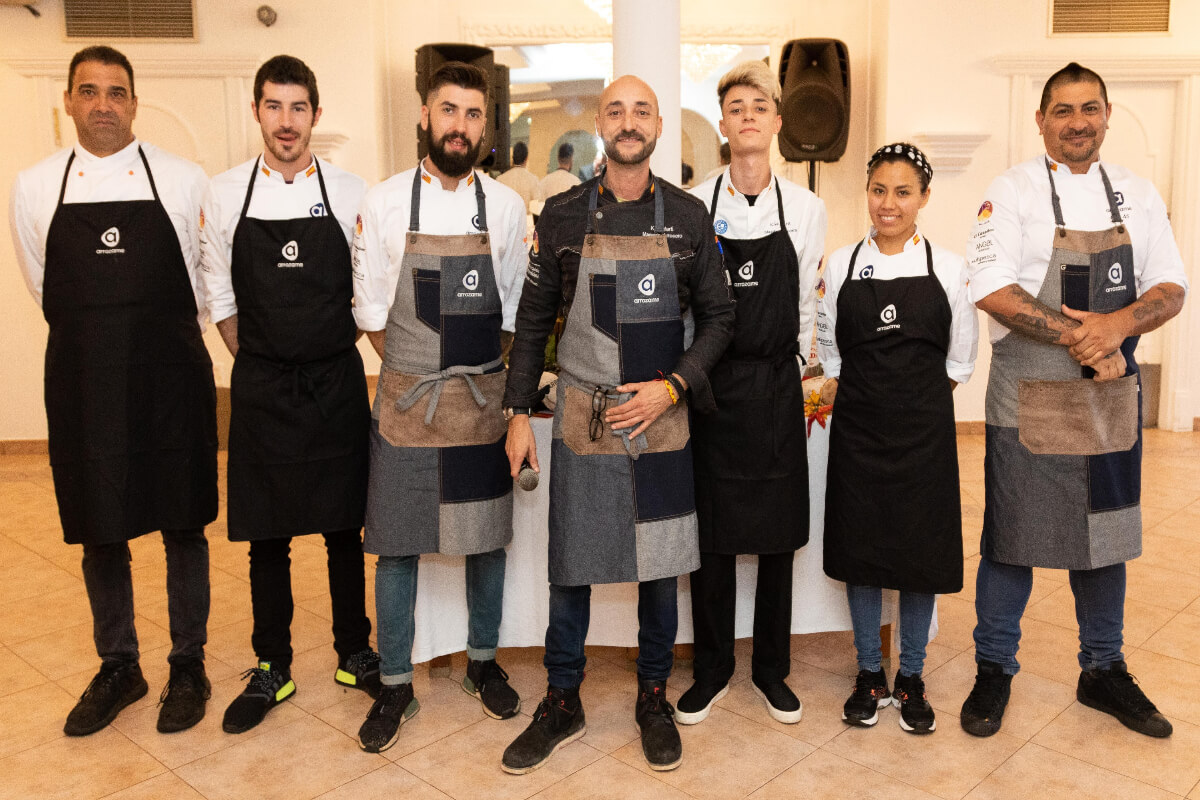 Last Saturday an almost historic union took place in one of the rooms that the Ruycal multispace, located in Santa María, offers for the celebration of all kinds of events. Kike Martí, one of the best rice masters, was joined by Jaume Rosselló, producer in Inca of the wonderful and very peculiar Mallorcan truffles. The members of the Cofradía Balear del Arroz were witnesses and privileged tasters of such an illustrious coalition.

The Mallorcan Inca truffle was present in some delicious fried eggs, as if to highlight that the simplest and most humble food becomes the highest delicacy when it is touched by one of the best gastronomy products.
Jaume Rosselló, the supplier of the well-known “black gold” from Mallorca, explained to the diners that at first he doubted the quality of his product when one of the most renowned chefs on the island launched a string of rude words when he perceived the aroma of his truffles.
“I was going to leave shrunken and ashamed,” Jaume Rosselló explained to the audience of the Cofradía Balear del Arroz, “when I realized that he was talking about the truffles from his country, and not the ones I was bringing him. Since then he only buys them from me ”.
Most of the chefs in Mallorca have decided the same, and today Mallorcan truffles are present in Mallorcan haute cuisine in a very common way. 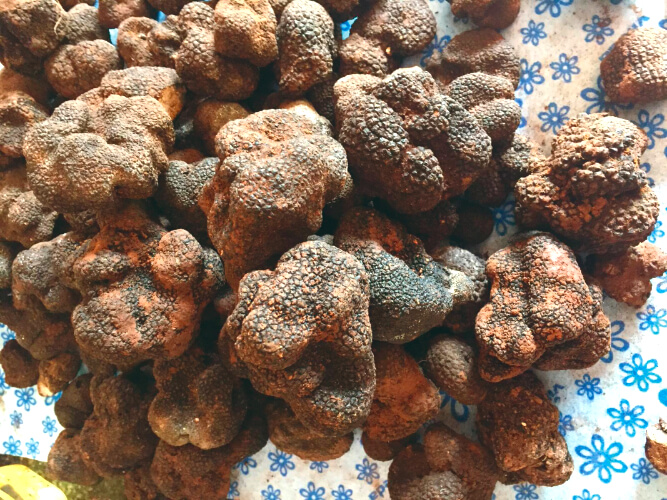 The king of rice, Kike Martí, prepared one of his famous fusions for all diners, in this case suckling rice from Villafranca. "The suckling pig comes from the Es Cruce restaurant, and I want to thank Guillermo Garí for the good job he does and the quality of the meat he produces," explained the chef to a very satisfied audience, who received him amid applause.

For this recipe the master uses boneless suckling pig. With the bones, he makes the broth and with the skin, he makes a crunchy one that he then places on the rice. "We sauté artichokes with black pork sobrasada, because above all we look for the Mallorcan product, kale, white turnip, pumpkin and parsnip". The result is a filling rice, with an intense and delicious flavor, with the tender meat slightly shredded and the crunchy skin contrasting with the mellowness of the grain. 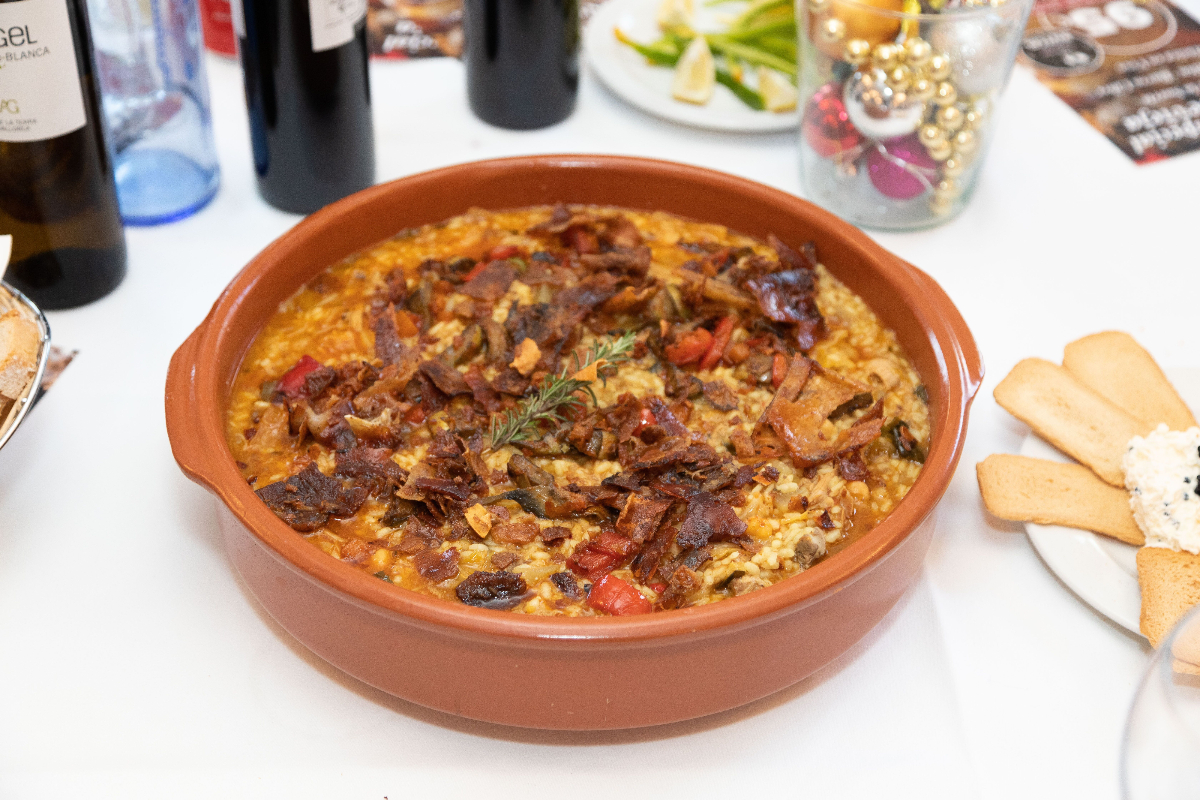 With the “Arrózame” project, Kike Martí became a pioneer in the fusion of rice. “With the word push me we play with the sensations: rice, touch, I loved… three voices that evoke warmth and things well done. We try to make careful dishes, and fusion "
A good proof that he has succeeded is that he has created a Mallorcan rice menu around his brand that goes far beyond the mixed paella or brut rice. It highlights the rice with conill amb seba and reventat d'Amazones, which "smells like a bar and whose flavor invites you to experience the Mallorca of bars, of mid-afternoon coffee." Special mention should be made of its rice with gizzards, snails and quail, or the octopus in a clay pot, or the wonderful rice with vegetables and clams with squid stuffed with botifarrón.
Kike has taken his passion for rice a little further and now, in addition, he also runs a consulting company for restaurateurs and hoteliers who want to perfect the art of cooking rice.

Andrés Gelabert contributed the white wines, Blanc de Blanca; rosé, Angel Rosat, and red Gran Selecció, from his Bodegas Ángel, to pair the meal that ended with a recital by Joan Toni Vives, former member of Los Bohemios, who sang with a powerful voice, some of the greatest hits of what was his flag group, this time accompanied on the keyboard by Gaspar Pericás.