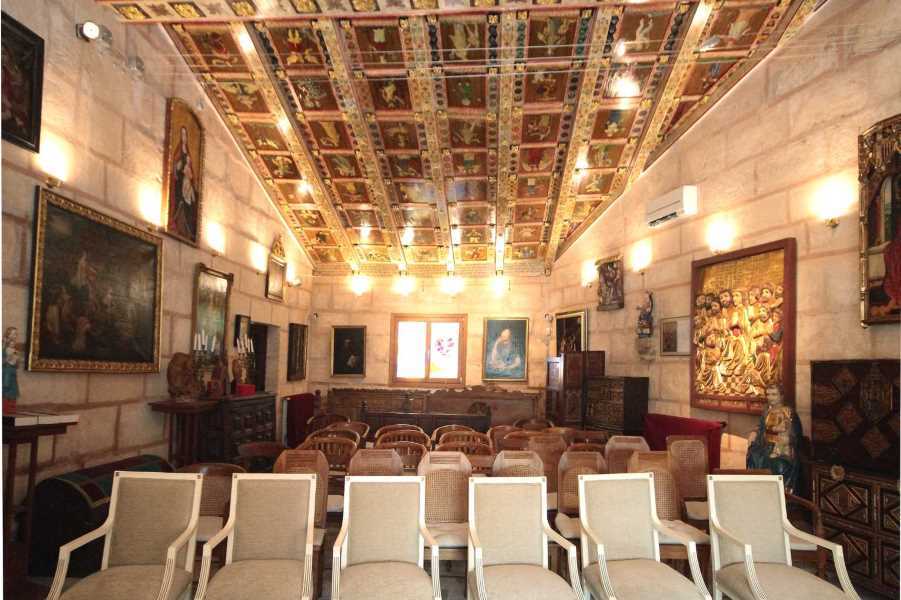 The chapel is an extraordinary manifestation of Romanesque art.

Works of art exhibited in the rooms and in the gardens with 8 lakes, and a restaurant that completes this exclusive and wonderful resort.

When you think that it is no longer possible to find places where, not only the cuisine but also the environment, you may be surprised, it reaches my ears that there is a place in Campos that fuses art with an interesting gastronomic offer.
Developed from a possession of more than six hundred years, which offers us an art exhibition integrated into the surroundings of the gardens, buildings and rooms, my visit to Es Revellar Art Resort has fueled my hopes of finding places that may still surprise me.

In the words of its director, Es Revellar is not an agrotourism, but a museum with 16 rooms and, of course, reason is not lacking. It is the only resort that offers this concept in Spain and there are only seven in the world, so the guided tour and dinner offer seemed to me to be a highly recommended experience. Starting with a 19th century chapel, inside which we can find an incunabula from the 5th-6th century AD, passing through portable confessionals, one Mudejar and the other Baroque, a Vargas furniture from the 16th century, a painting by Juana de Óvidos from 1640, a nativity of Antwerp from the 16th century, an Italian "Madonna" from the 15th century and a Dutch panel from the 13th century, up to a painting from the El Greco school. 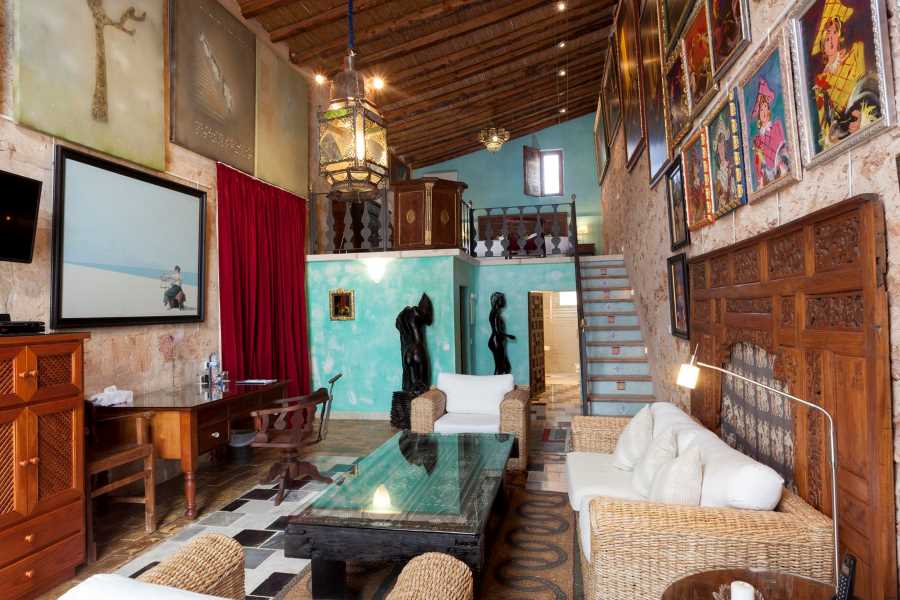 All rooms at Es Revellar are different, with exclusive works of art. In the image the Indonesia room, with two levels and all the comforts.

No less remarkable are the eight lakes integrated in its gardens surrounded by fountains or the most powerful collection of African art and anthropology that I have seen in many years, everything is incredible. Also very interesting is the Land Art proposal that ends up creating a feeling that goes from bewilderment to surprise. A sensory explosion that ends in front of a Roman capital with the image of Romulus and Remus to end the tour. 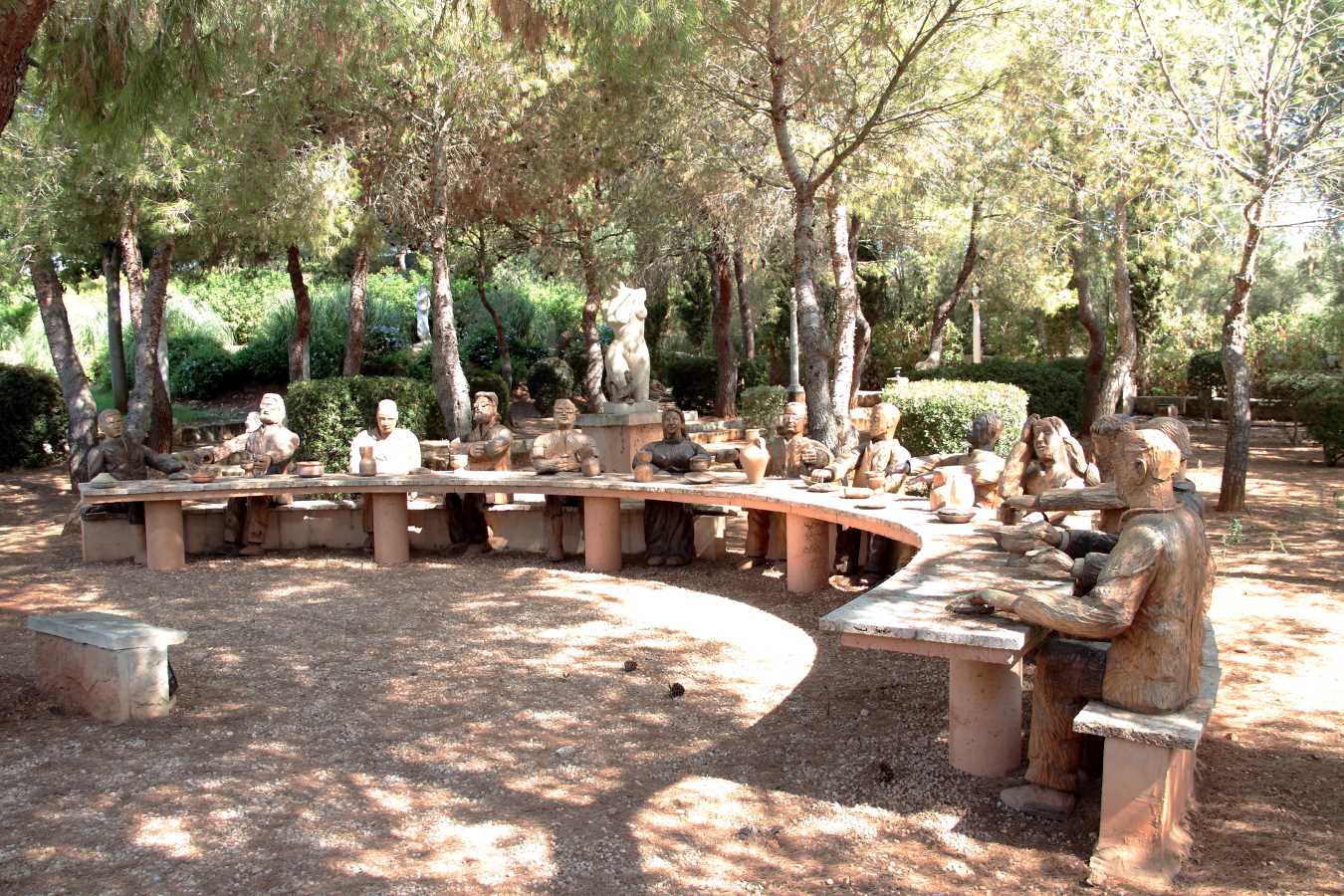 The Last Supper according to Es Revellar Art Resort.

If all this is surprising, it is no less so what for me represents the space with the most artistic value in the entire complex: a room dedicated to Picasso and about which I will not give details so as not to steal the feeling of surprise from the readers of this chronicle that they decide to make a gastro-artistic visit to Es Revellar.

The corollary of the visit is a dinner in the restaurant, with an interesting proposal by chef Tolo Juliá where, above all, the exquisite treatment given to the raw material prevails. Local produce, from the market, even from its own garden, very well treated and converted into a tasting menu consisting of an aperitif in two courses and two main dishes with two options of choice in each of them. No bombastic titles or sophisticated plating, humble but very elaborate cuisine whose value increases with views of the great 86-meter-long mural by the artist Jesús Cánovas, with a contemporary vision of some of the most significant classical Greek myths such as the Myth of Prometheus, the three Graces, Olympus, the gate of Olympus and Trojan Horse, among others.

The refreshing shot of cherry gazpacho preceded the two appetizers, figs with Iberian ham and tuna tataki with vegetables. The flavor combination of figs and ham make it an ideal dish for this time, as well as the crue vegetables that accompanied the tuna. As starters, two interesting proposals of which, despite the freshness and quality of the product of the "Duck confit salad and sea urchin sauce", highlighted the "Green bean ravioli with curry sauce". Homemade pasta, technically very elaborated to contain a filling made from green beans and a curry sauce with a very fine texture and moderate flavor that allowed perfectly to distinguish the set of flavors proposed by the chef. 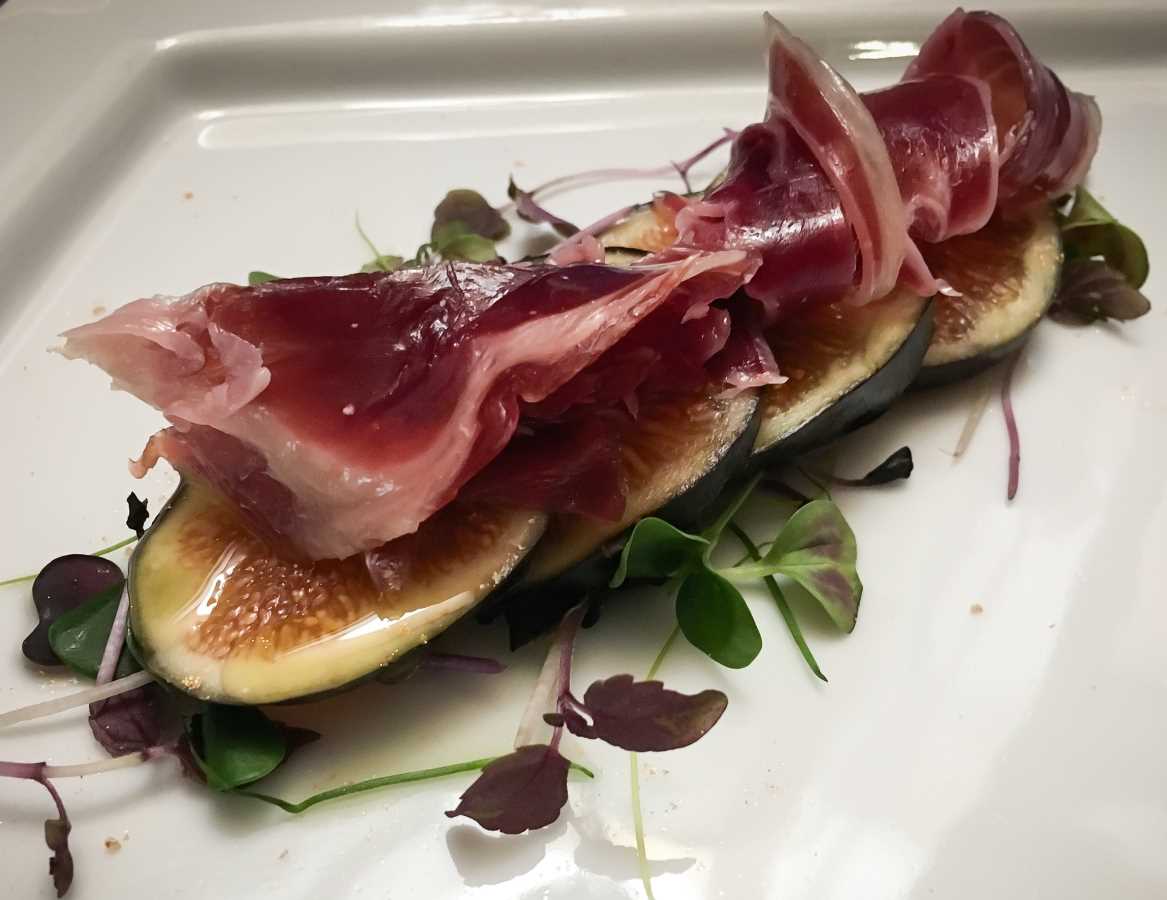 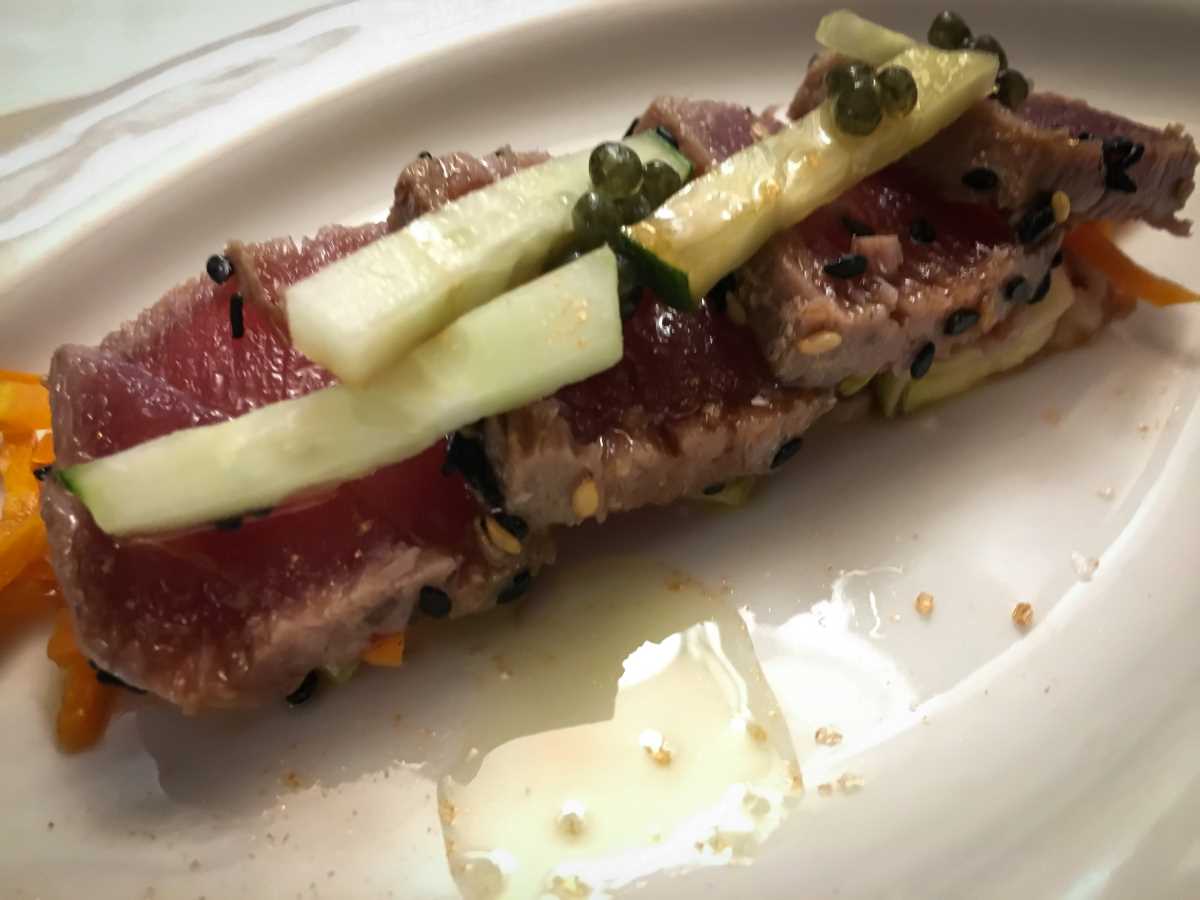 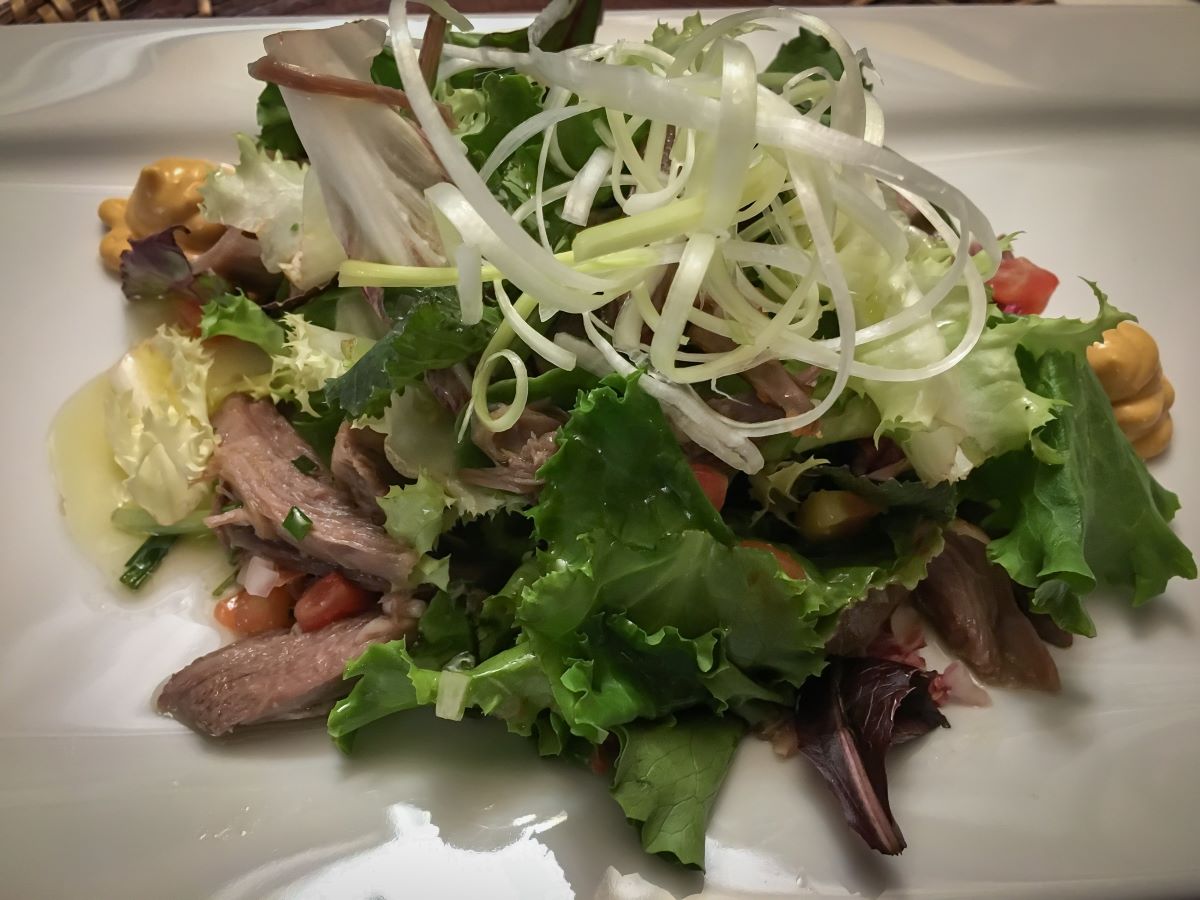 As main dishes, a meat and a fish. Although the "Steamed fish with black rice and aioli" was good, the "Low-temperature veal cheeks with plum sauce" were a treat for the palate and the senses. Sixteen hours of cooking are to blame for a texture that goes beyond softness and, best of all, the flavor that this type of cooking allows, which even made the plum jam, made by themselves, dispensable. Some vegetables al dente were the perfect accompaniment to an outstanding dish that set the bar very high for the desserts that, as you can imagine, perfectly responded to the expectations that I was creating as dinner progressed. 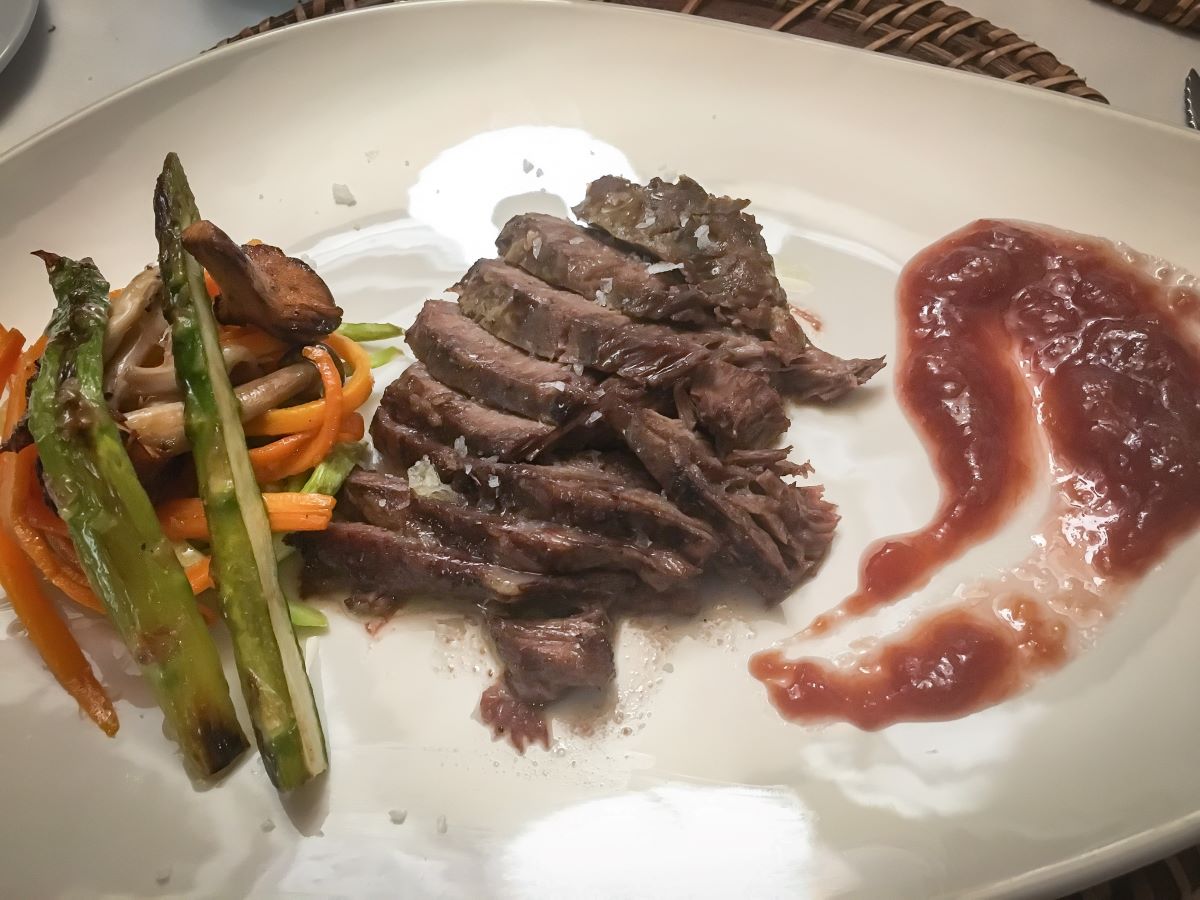 If the ensaimada and burnt cream ice cream seemed good and appropriate to the menu and the setting, the selection of cheeses was the icing on the cake. Although it is difficult to get an idiazábal to surprise me, after I tried a gold medal Aizpea months ago that I already talked about on my blog, it is not so difficult to get it with a cured sheep cheese whose preparation allows more play of flavors. Thus, the rosemary bark gives it a curation and an incredible flavor that was only surpassed by a cured Mahon who would have brought tears to the eyes of Boccaccio himself when back in the fourteenth century he first described the benefits of the quintessential Italian cheese that gets its name from the area from which it comes, the Reggio. This extra-cured Mahon is nothing to envy to any other similar cheese, and the mojito with jellies is absolutely fantastic, a proposal from the cocktail bar that Jaume Puigserver develops. Of course, I have a lot to envy the guests of this museum, because every day they reside in it they have the opportunity to recreate themselves in a unique space, surrounded by nature, art and gastronomy.

It won't be the last time I drop by this Art Resort. Worth it.